We hosted our firsts cluster group meeting at Turnditch & Windley last night. Again we were lucky as the sun shone down on us, a small group of us gathered to get to know one another for the start of a support network for a press ion that can sometimes feel quite isolating.

We did a round of introductions, with a variety of freelance fores t school leaders, trainees and teachers who use forest school during term time. A quick cuppa and we headed off for a walk around the woods. 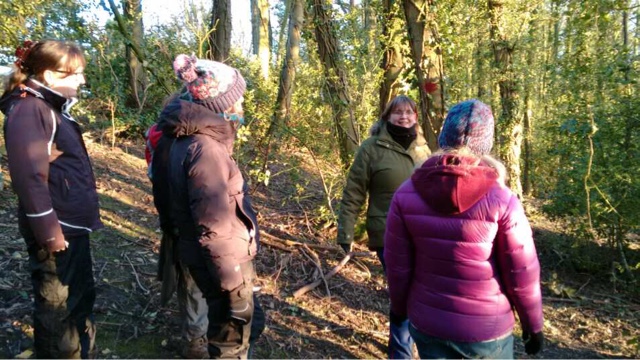 Guided tour of the wood.  Thank you Andrew, for taking photos. 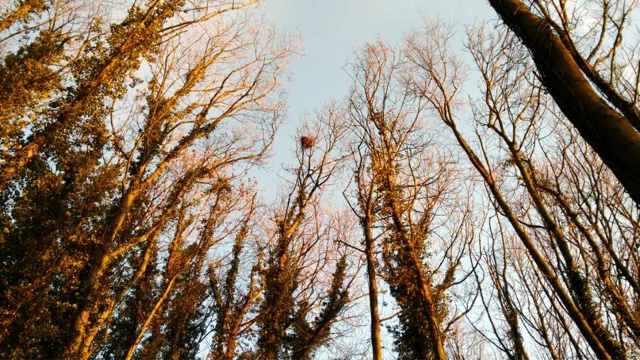 Rooks nests high up in the trees.

We discussed involving the children in a bird survey and this was approved off by a buzzard who popped in to harass some pigeons.

I also recorded some bird song, but have struggled to identify the bird from online sources, I may need to call on some outside help!  This is also an area for me to develop personally as my bird id is not great.

From this meeting, I learnt that I'm extremely lucky to have this woodland to use. We spoke of  the challenges of finding a suitable environment and how this impacts on the children's development and the frustration of not being able to have the full forest school experience.  But all agreed, outside was still the best. And it's all good. 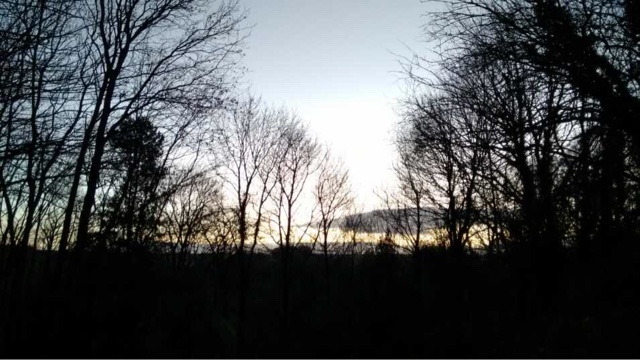 Sun setting later each day and bringing a spiritual warmth and connection to our woodland.

Posted by Christine Thomas at Tuesday, February 23, 2016 No comments:


Following our last session, Andrew and I sat down and reflected on what we wanted from the Woodland Wild Play sessions.  We both agreed that we wanted it to be more child led to stick with the ethos of forest school.  Last week, we had practised the fire circle, covered the woodland boundaries and covered some basic rules.  So this week, we decided to let go of any planning and see where the children led us.

Although the basics need to be kept to, there is also space to be purely child led without forcing rules in an adult to child manner.  The rules would be gently reminded of when necessary.

For the majority of the session, the children made dens, either on the ground or up trees, explored, put up tarpaulins in their dens, explored how to climb a tree using a rope and generally did their own exploration.

There was a request for the ropes to go up, but at a higher level, so Andrew helped them put them up and led a discussion on now that we had higher ropes, how were they going to get on them.  Requests for ropes higher up in the trees were referred to Go Ape courses!

The activity of collecting wood for the campfire is continuing, it was started last week, so this week, the boys devised a way of carrying more wood up to their wood stack. We will be having marshmallows and popcorn on the last session so they are working towards considering what we will need.  I was really impressed with the wood carrier and they look really proud of it.

We finished with a game of Capture the Flag, using led strips as a flag, this involved a whole range of spying, diversions, attack, defence, communication, capture & rescue, creeping, moving quietly, being noisy and generally having fun.  It was a great way to finish the session before hot chocolate, we may need to cover some boundaries of not shoving and being mindful of other people, which is all part of learning to deal with life.

Hot Chocolate and Sultanas finished us of and refreshed us all before heading home.

It was all quiet, the owl was giving us advice on how to pack the car when we realised how beautiful the full moon was.  It dipped in and out of the clouds and gave us a light to view a beautiful old ash tree by. Andrew got his camera and tripod out of the car and we spent some time admiring the view as he photographed it.

Posted by Christine Thomas at Saturday, November 28, 2015 No comments:

This week we started by revisiting the boundaries of the woods and getting the children to help do some risk assessments.  We have a lovely old Ash tree in the woods, but in the recent high winds, it has become damaged, so we invited the children to look for the damage and decide what the best course of action could be.  They decided we should probably avoid it as if it broke and landed on any of us it would be very painful.

The Ash tree is on the route to the spring, so it became obvious that the Derbyshire Dragon had knocked the tree when flying in for a drink... This rather worried one of our younger members, so one of my favourite books, Herb The Vegetarian Dragon was introduced as a reassurance.


We also practised how to move around the fire circle so that we could safely have a go at the fire lighting challenge, using a striker to get a spark and start their own small fire.  Nearly everyone who had a go persevered until the succeeded, it's not an easy way to start a fire so I was impressed with how they all stuck at it (and waited patiently for their turn)

The children have started to mark out their territories within the woods, each finding a group they want to be with.  They are starting to settle into the woods and find their way around within comfort.
Posted by Christine Thomas at Saturday, November 28, 2015 No comments:


We started our first After School Club this week and we all really enjoyed ourselves.  This week was letting the children become familiar with the woods, exploring the physical boundaries and deciding what we needed to make shelters for the Woodland Folk.

Andrew is training to become a forest school leader and is running his six practical sessions towards his qualification at the Woodland Wild Play club.  He is an artist who makes a lot of ephemeral art out in the woods.  I'm supporting him through the process of qualifying, it can be a very hard but satisfying journey.
Posted by Christine Thomas at Saturday, November 14, 2015 No comments: